During 2020, 100% of your tax-deductible donations for several months were used to send food deliveries to Zimbabwean musicians during drought and the ravages of “acute” hunger! We have received so so many thank-yous to pass on to you!

Even a small tax-deductible donation to MBIRA can provide huge support to Zimbabwean traditional musicians and their families. 72% of Zimbabweans live in chronic poverty (UN 2016), 28% of children under 5 are stunted due to chronic malnutrition (World Food Program 2019). Nutritious food, primary school fees, and health care of any kind are a struggle to access, or out of reach, for many of the traditional musicians MBIRA has recorded all over Zimbabwe. 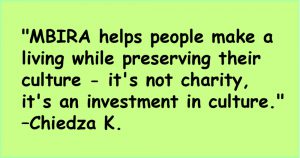 Read about the success of the MBIRA Musicians Fund.  Read about MBIRA‘s support for traditional music education in Zimbabwe. Donate Now with check, card or PayPal account; or,  donate without spending a cent.

Your donations help MBIRA to:

You can also add a donation to your MBIRA Store order.

To make a tax-deductible donation by CREDIT/DEBIT CARD or PAYPAL: