Erica Azim answers your questions about mbira — the music, the instruments, the people, and the cultural traditions behind them. Questions about this website and the MBIRA non-profit organization are also welcome. If Erica doesn’t know the answer to your question, she’ll ask one of her many Zimbabwean mbira player friends and relay their answer.

Read current questions and answers below, then ask a new question.

Some mbiras do have softer keys than others. It helps to grow your thumb and forefinger nails at least as long as the end of your thumbs/finger, and play in a position that uses both the flesh and nail. Calluses help, but even in Zimbabwe many mbira players use wire picks on at least one thumb or finger. We sell one type at https://mbira.org/store/mbira-accessories/thumbpicks/. Contact us again if you want a recommendation to help you buy an mbira with softer keys.

I would add that the concept of one beat is Western, and all the hosho sounds are important in the music, and may have dance steps that fall on them. But what I am calling the primary beat is the one that people hearing mbira are most likely to clap on, if clapping in a simple way. More complicated makwa (clapping) with mbira is another thing with much rhythmic variety.

The string can be used to carry a deze, mostly by sellers who need to carry several at once. Musicians may use that to hang the deze on a wall out of reach of small children.

It is important to never carry a calabash/gourd deze by the lip, as that is the most fragile part and easily broken. A few people put bamboo (or another material) around the lip of the deze to strengthen it, but that does reduce the resonance somewhat, in my experience. A fiberglass deze can be carried by the lip if it is empty or has little weight inside. 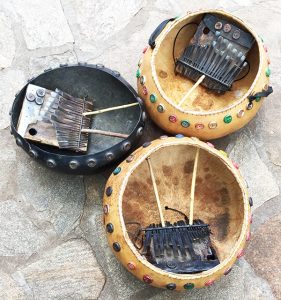 Mbira-type instruments throughout Africa have many configurations and numbers of keys. The type of Shona mbira in Zimbabwe that is primarily discussed on this website most commonly has 22 to 24 keys, but sometimes up to 28 or even more according to the musician’s preference. Learn more about this at The Mbira Instrument.

A gwariva is the hardwood mbira soundboard that we hold in our hands and to which the metal keys are fastened. The word gwariva may also be used to refer to the whole mbira instrument.

An mbira tuning is the set of relationships between the notes of an mbira. Each mbira instrument typically has one tuning for its lifetime, set by the lengths, thicknesses, and positions of the keys held down on the bridge by the pressure bar. We tune an mbira by tapping the out of tune key from one end or the other.

There are many standard tunings and any number of idiosyncratic variations set by individual musicians and groups. Nyamaropa tuning is the most common tuning, but is found in infinite different pitches around Zimbabwe. The intervals on a nyamaropa, or “straight,” tuning mbira, are similar to Mixolydian mode in Western music, but have many slight variations as they are not tuned to Western half and whole steps in most cases.

You can read more about mbira tunings and listen to examples at Tune Your Mbira.